Happy to announce Joe Jacksons latest album: Fast Forward! On which I played the drums and co-produced 4 tracks

Fast Forward was produced and arranged by Jackson, and features four sets of four songs recorded in four different cities – New York, New Orleans, Berlin and Amsterdam – each with a different set of incredible supporting musicians. You can listen to "A Little Smile" (a track from the Amsterdam sessions) on the JoeJackson.com homepage right now or by clicking Here. 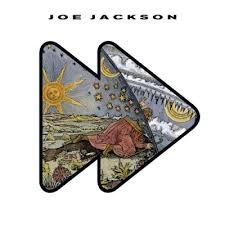 Jackson has called New York home for many years.  He recorded these tracks with Bill Frisell on guitar, Brian Blade on drums, his longtime bassist Graham Maby, and jazz violin star Regina Carter. Along with three originals including the album’s title track, these sessions also feature a cover of Television’s “See No Evil.”

Distinguished by the most diverse instrumentation of the four sessions, Jackson is joined on these songs by frequent collaborators Stefan Kruger and Stefan Schmid from the band Zuco 103, members of the Concertgebouw orchestra, and the project's only guest vocalist, 14-year-old Mitchell Sink (from the cast of the Broadway musical "Matilda.")
SESSION 3: BERLIN